For mortgage calculator please click on the link below:
​https://alex-macale.c21.ca/mortgage

The government on Monday released details of a program announced during the last federal budget, an initiative that could see Canada's housing agency contribute up to 10 per cent of the price of a buyer's first home if certain conditions are met.
Under the fine print for the First Time Home Buyer Incentive program, which was announced in March and will officially launch in September, a first-time homebuyer who earns less than $120,000 can qualify. The Canada Mortgage and Housing Corporation would kick in up to 10 per cent of the purchase price of the home, providing the borrower comes up with the minimum amount for an insured mortgage, which is now at five per cent.

There's also a requirement that the total value of the mortgage plus the CMHC's portion don't eclipse $480,000. A government official says that effectively means the program is only available for properties worth a maximum of about $565,000, regardless of whether or not they have met the other requirements.

If that bar is met, the CMHC may kick in an additional five per cent of the purchase price of a resale home. For a newly built home, the CMHC may contribute up to 10 per cent.

The stakes from the CMHC would be interest free, meaning no ongoing cost to pay down, like a mortgage does.
But the government says in exchange for its stake, the CMHC would get to participate "in the upside and downside of the change in the property value" — which means they would be entitled to any corresponding increase in the value of a home when the buyer eventually sells. On the flip side, the government would also be on the hook for any share of the loss if the property depreciates.
​ 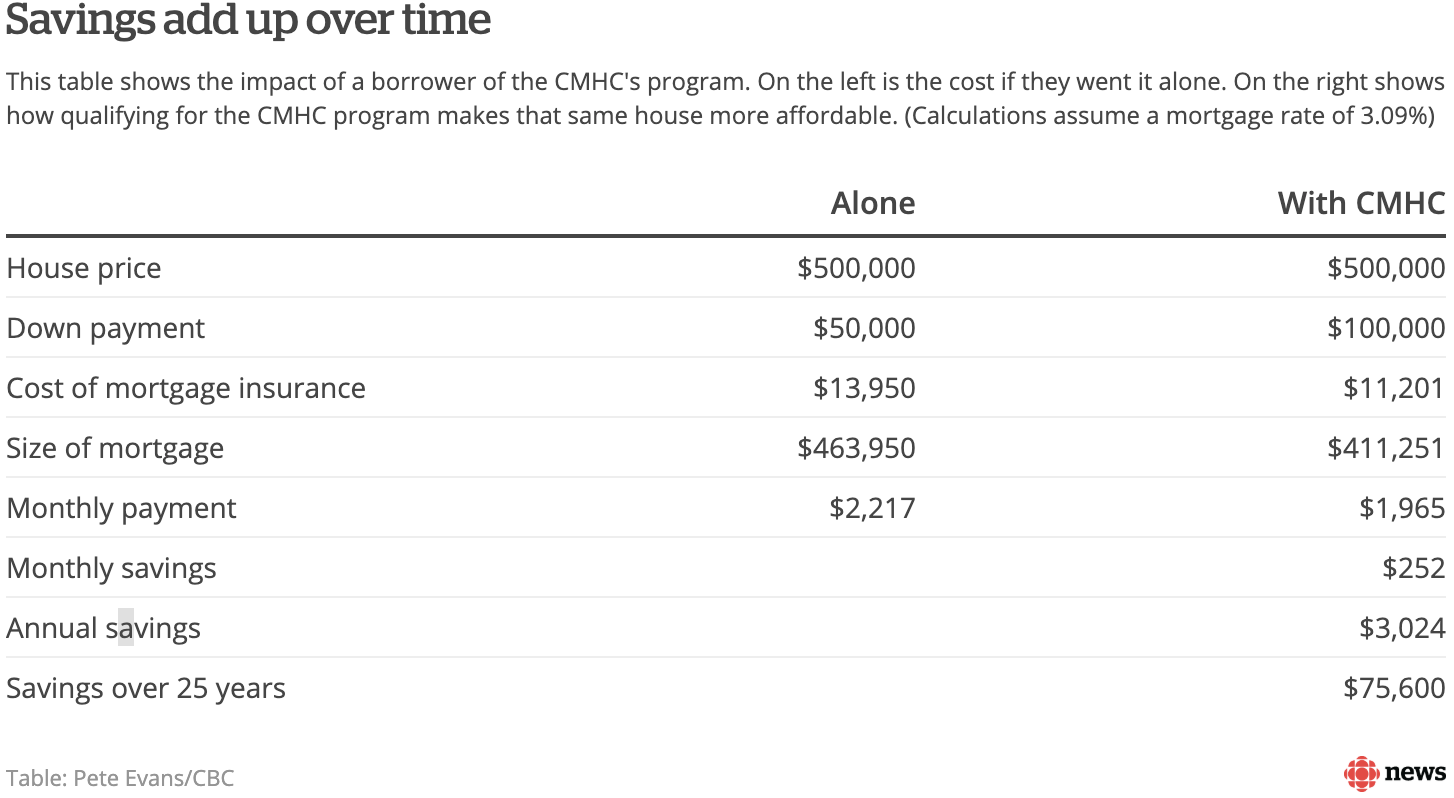 ​On a home costing $500,000, if the borrower puts up $25,000 and the CMHC puts up the same amount, the CMHC would then own five per cent of that home. So if, down the line, the house appreciates to $600,000 and the borrower wants to sell, they would have to give the CMHC five per cent of the sale price — $30,000 in this example — not the $25,000 the CMHC put down in the first place.
​
While a bill would be paid down the line, the savings over the years could add up. In the example above, the program would save a would-be borrower $286 a month in mortgage costs over the life of the loan, $3,430 a year.
"This will mean more money in the pockets of Canadians and will help up to an estimated 100,000 families across Canada," said Jean-Yves Duclos, the Liberal MP and cabinet member in charge of the CMHC.